Belfast and Derry are known for their colorful murals, many of which still provoke strong reactions that depend on your position in relation to the sectarian divide. Since the end of the Troubles, however, some murals in Belfast have been repurposed to support other causes and peoples. Using funds from the national lottery and with community support, these have been replaced with more positive messages.

But after a 90-minute black taxi mural tour, we were left with the distinct impression that, while the Troubles themselves may be over, a powder keg of discontent remains in the divided communities along the Falls Road and Shankill Road. That division is readily apparent in the gates and high walls that separate the communities. Even today, the gates are closed at particular times to limit movement between the areas.

According to our driver, the communities were asked a couple of years ago whether the walls and gates should come down, and the collective answer was, “No.” 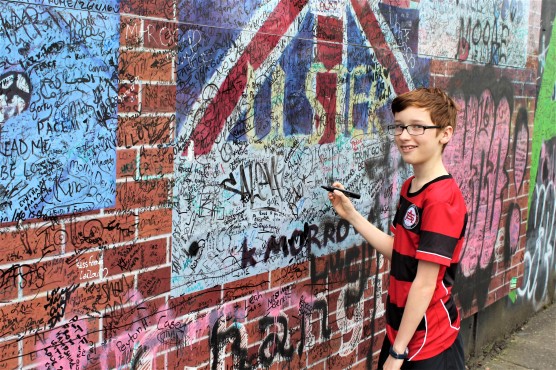 Writing on the peace wall is encouraged.

High walls separate the Falls from the Shankill. This is part of a memorial to republicans killed while making bombs in the houses destroyed where this memorial now stands.

Our driver describes why the walls still are needed.

Gates in the distance are shut each night to separate unionists from republicans.

Memorials to those killed during the Troubles appear on both sides of the divide.

Seething under the surface

Even Declan has a more-than-a-tourist understanding of the Troubles, but this issue had not been apparent in our relatively insular neighborhood near Queen’s University or at Declan’s school. The UK held parliamentary elections Thursday, and during the run-up we listened to an interview with an Alliance candidate who said that only 7% of Northern Ireland’s schools are integrated. Remember, we’re talking Catholic/Protestant. Lagan College, which Declan attends, was the first planned, integrated school in the north. (Although that didn’t stop Declan’s classmates from asking directly or indirectly about his religious background.)

So, again, while our part of the city is fairly integrated (as far as we can tell), the Falls (Catholic) and Shankill (Protestant) areas are dominated by folks of one religion, with little mixing between the two. An insular upbringing, pervasive poverty, the continued existence of paramilitary groups and lingering bitterness over the Troubles stoke resentment between the groups.

Gangs of mainly younger people have been known to throw rocks at passing cars near the gates right before they are closed, and violence between feuding groups is not uncommon. As we passed the Holiday Inn Belfast City Centre last Saturday, we saw the burned-out shells of two coach buses in the hotel car park. Arson is suspected, either post-Troubles hooliganism or warring factions of competing  commercial coach companies, according to our driver.

Despite the cessation of the Troubles, paramilitary groups on both sides continue to operate. Occasionally, you’ll read about an attempted bombing by the Real IRA. Our driver tells us that businesses along the Shankill Road still pay protection money to paramilitary groups. And feuds break out among rival groups, often over the drug trade that has replaced terror attacks.

Getting the hell out of Dodge

In the Holiday Inn car park, we also saw a huge amount of debris piled up in anticipation of the July 11 nighttime bonfires that mark the start of the Protestant marching season. Nothing like lighting a huge pile of crap on fire to mark the Protestant victory at the Battle of the Boyne more than 300 years ago on July 12, 1690, huh? During our tour, we passed more than a half-dozen bonfire sites, where the debris piles have been growing since Easter and are guarded 24/7 between now and the time of lighting.

Owners of many of the bonfire sites don’t like these events occurring on their property, but are you going to tell a paramilitary group that they can’t do it? No, I didn’t think so. Last year, two houses were destroyed and a third badly charred, victims of the bonfires.

There’s a good reason so many Belfast residents schedule vacations during this time. I wanted to stay and see what the fuss was about, but it wasn’t possible given a tight schedule between now and when we return to the States, incoming guests and planned trips to Donegal in the Republic and northern Portugal.

Upon further reflection, though, I’m glad we’ll be away. I don’t want my memories of our time in Belfast tarnished by partisan posturing.