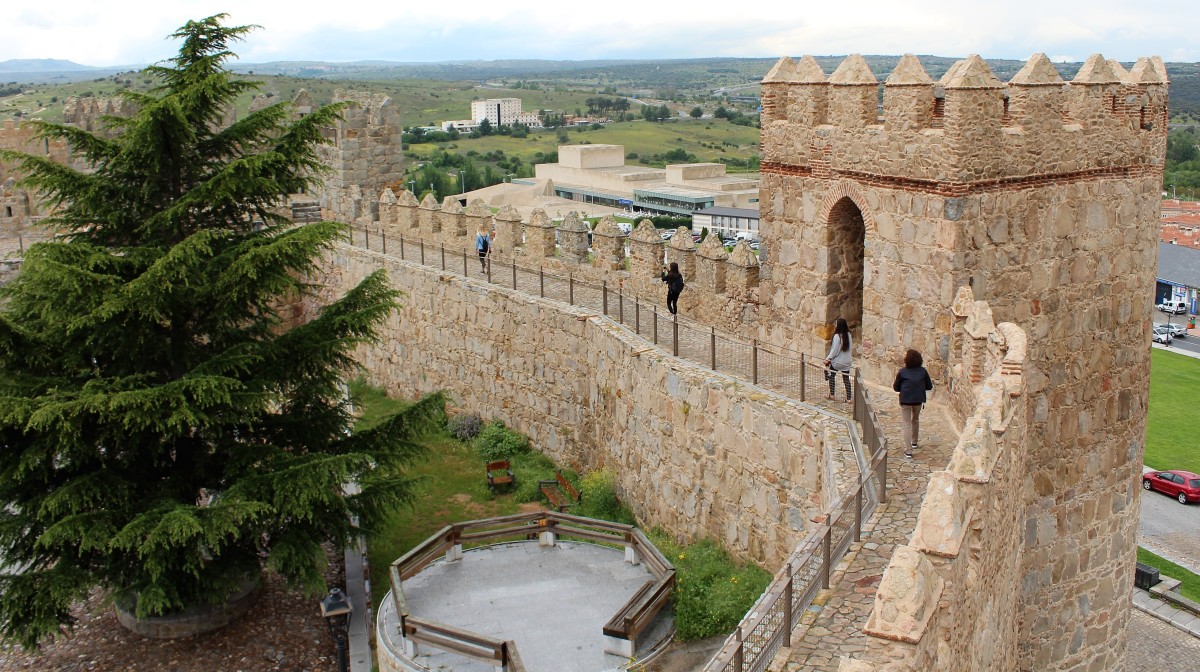 Ávila, about two hours northwest of Madrid by train, is known for its imposing fortress walls and as the birthplace of St. Teresa. As with all things vacation, I don’t ask too many questions about where we go, so I didn’t know what to expect from our visit to the Museo de Saint Teresa, built on the site of her birthplace home. I certainly didn’t expect to see St. Teresa’s dismembered ring finger in the gift shop—with decorative ring still on bony finger. You couldn’t take pictures, but you can see it here.

The museum was crypt-like, with long brick- and stone-lined passages punctuated with curved archways. There you can learn more about her life, including how she formed the Discalced (barefoot) Carmelite order, and see many of her writings. All the interpretation was in Spanish, so I could only look at the artifacts. I especially enjoyed the collection of holy water fonts. Teresa, who lived between 1511-1582, was a firm believer in the power of holy water.

You can pay two Euro to visit her birthplace, but the gift shop (and her finger) are free to visit. We’ve glimpsed other body parts and reliquary at museums in Florence and Coimbra (Portugal), but never so naked (or furry). Seriously, I wonder whether the white tufts growing from the top of the finger belonging to the patron saint of headaches could be used to treat diseases, much like the mold that Alexander Fleming discovered led to penicillin.

All I could think of was what a gruesome souvenir. And I was glad it was her ring finger and not her middle one. I don’t like the idea of a saint flipping me off from across the centuries.

Ávila is a fine example of a walled city, which encompasses 77 acres, eight (or nine) gates and more than 80 semi-circular towers. The walls were begun in the 12th century and are integral to the city in more ways than one—a portion of the imposing Gothic Cathedral of Ávila doubles as part of the wall. 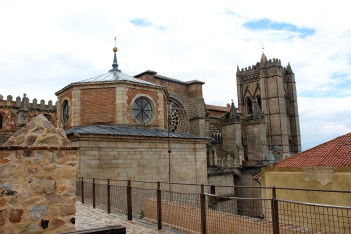 The Cathedral del Salvador forms part of the wall around Avila city center.

White storks, which are common in Spain, nest wherever they can find space. Church spires and electric lines are typical targets.

We visited during the day, but at night the wall is illuminated, giving what some refer to as a fairytale effect. You can walk along parts of the tower, which we did amid the raindrops. Surprisingly, admission to walk the walls is free until 4 p.m.—at least during this part of the year.

We also glimpsed many large nests on the tops of buildings and on electrical poles that likely were home to white storks and their babies. We’re not ornithologists, but that’s certainly what the birds resembled.

Our initial itinerary was more ambitious, but the rains from Madrid followed us to Ávila, putting a literal damper on our plans. Declan wanted to visit Los Cuatro Postes (the Four Posts), the place on the road to Salamanca where a 7-year-old Teresa and her brother, who wanted to be martyred by the Moors, were stopped by an uncle. The area is renowned for its impressive views, especially at night.

Declan had to settle for a postcard of Los Cuatro Postes that he bought in the gift shop of St. Teresa’s museum. The postcard was 35 cents, but seeing her furry, 500-year-old finger didn’t cost a cent.