Marilynn keeps up with everyone. We had at least two of her childhood friends from Kansas at our wedding, along with one of her Harvard roommates, other friends from college and a handful from grad school. 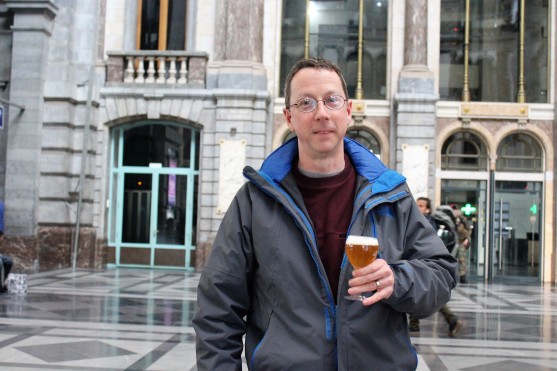 Who can turn down free train station beer? 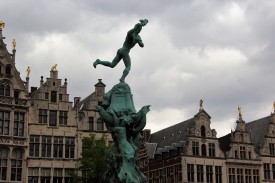 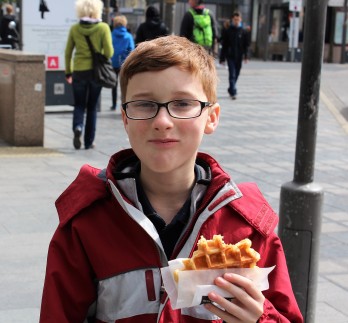 In Madrid on a trip a few years ago, we stayed with a woman Marilynn met once, a friend of a friend. Marilynn kept up with this woman as she married, changed jobs, had kids and watched them grow up. Marilynn sends the occasional letter or email, and we’re the rare family that still sends out Christmas cards, 120 last year—fewer than in years past because we left for Belfast a week after the holiday.

All of that to say we spent a wonderful weekend in Antwerp with Marilynn’s friend Béné, who opened her home and gave freely of her time to show us the city of her birth. Marilynn and Béné lived on the same staircase for a single year while both were attending Jesus College, Oxford nearly 30 years ago.

We didn’t visit any particular museum or cathedral but walked around the city as Béné showed us the sights and talked about Antwerp’s rich history. She’s a schoolteacher, but Béné could easily be the best tour guide an Antwerp visitor could ask for.

While wandering around town on Easter morning, amid the cacophony of church bells announcing Christ’s empty grave, we had a delightful brunch at probably the most irreverent restaurant you’ll find.

At Het Elfde Gebod (the Eleventh Commandment), you’ll find the place chock-full of saints, sinners, cherubs and other statuary on the walls and sitting on nearly every flat surface. Kitsch aside, the food was superb. I had a plate-filling omelet, and Marilynn had The Last Supper, reminiscent of a Ploughman’s lunch with tasty bread, brie, ham and olives. By the way, the 11th commandment is “to eat well, drink a lot of tasty beer and have lots of fun,” according to the restaurant.

Our thanks again to Béné and her family for the warm welcome and the chance to visit, relax and wash clothes.