Declan and I set out from Santiago de Compostela to glimpse the largest city in Galicia, A Coruña. The city has a quarter-million residents, compared with just under 100,000 in the Galician capital of Santiago.

We walked through the Santiago market along with way, a fulltime market with meats, seafood, vegetables, fruit and lots more. The train station is a haul, and we got lost a couple of times, but the trip was a quick 30 minutes. Declan ordered our tickets in Spanish, and the seller commented that his Spanish was “perfecto.” 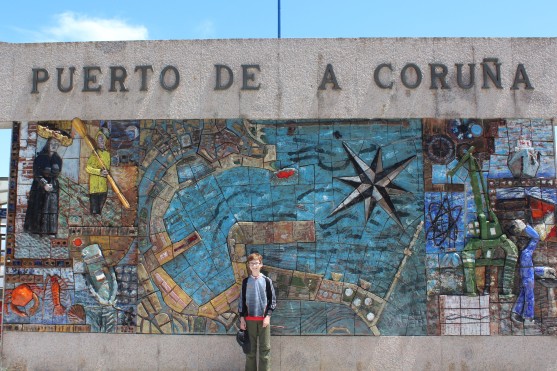 A Coruña just out from Spain, as Declan shows on this map.

View from the Plaza de Maria Pita in A Coruña.

View from the Torres de Hércules, which is almost worth the walk.

Declan wanted to see the expansive Plaza de Maria Pita, which backs up to the A Coruña waterfront and is the center of the compact old city. We took a bus to near the plaza and intended to walk to the Torres de Hércules, which we both saw signposted along the way.

Although attributed to the Roman god, the Tower of Hercules was built by Romans in the 1st century AD near the northern tip of the city. The signposts certainly weren’t meant for pedestrians, because we wound up walking in the total opposite direction for what seemed like days.

Once we got our bearings back (and took another bus), we arrived in the vicinity of the World Heritage listed tower but didn’t have a chance to look at it up close nor climb its tower because we had a home-bound train to catch.

Marilynn’s conference ended on Friday, so Saturday was her day to see Galicia. After a quick stop into the Cathedral de Santiago, we made for the train station to Pontevedra, the sixth-largest city in the region. Declan originally wanted me to rent a car and drive through a few towns and into Portugal, but we decided another train journey would be a safer bet.

With fewer people than in Santiago, Pontevedra proved much more walkable than A Coruña. It’s also off the beaten path, so we shared the narrow streets and numerous plazas of old town mainly with the locals. Wheeled transportation is popular for tots and adults alike, so we also shared the paths with little bicycles, big bicycles, electric bicycles, hoverboards and remote-controlled Mercedes and Range Rovers for the tykes.

A typical square in Pontevedra.

We enjoyed a good lunch in a street-side café: scallops for me and seafood empanadas for Declan and Marilynn.

Declan wanted to see the original façade of Santiago de Compostela in the Museo de Pontevedra, but that part of the museum was closed for renovation. So we had to settle for modern Galician masterworks and pottery chards from early settlers to the area.

While wandering back toward the train station, we stopped into the Santuario da Virxe Peregrina, an 18th century church with Portuguese style. It was only one euro to climb up to the balcony and then further to the near the top of the chapel, so we did that. There wasn’t much of a view, but it did tick the tourist box for “something to climb.”