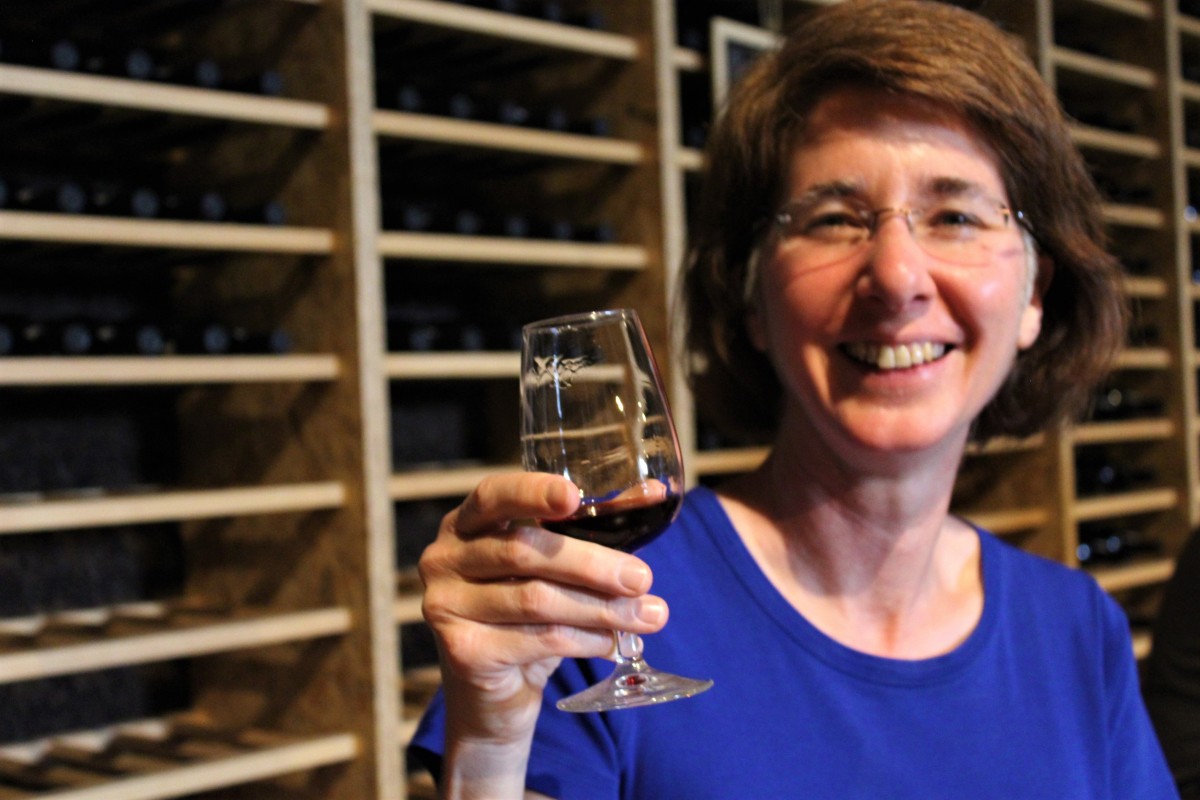 You can’t escape Porto without taking a boat tour and visiting a port wine “cave,” another word for honkin’ big wine cellar. And we did both on the same day last week.

A view of the Porto side of the Douro River.

The São Bento Train Station is an attraction onto itself, with 20,000 azulejos tiles in the entrance hall showing scenes from Portuguese history.

Inside the barrel house at Porto Augusto, where port can be kept for 40 years or more.

But first, we took time to actually visit the São Bento Train Station, a short walk up the hill from our flat and the station where we arrived in Porto. The entrance hall is filled with azulejos (painted tiles) of scenes from Portuguese history, dating to at least Henry the Navigator. According to my handy Portugal guide, it was completed in 1903. Some 20,000 tiles representing the scenes were added later.

A tour and a tipple (or two)

Porto is the port wine capital of the universe, so Declan had placed a wine cave tour on our itinerary. Our Airbnb hostess recommended a winery, so we crossed the Douro River to the Vila Nova de Gaia and started up the steep hills in search of a tour. But they were way more expensive than the guidebooks (and our hostess) said they were be. We visited several but didn’t want to spent 18 euros for a tour.

We had about given up when someone approached us and asked if we wanted a tour in English that started immediately for only five euro apiece. Well, of course, we replied, so off we went to Porto Augusto. It’s a third-generation, family-owned operation that doesn’t sell its product outside of Portugal.

The same guy who offered us a tour was in the video we watched, stomping grapes with his co-workers. It was a quaint operation, with the visitor center, tasting room and restroom area constructed of finished particleboard, a decorating motif we saw several times during our visit. We were surprised to learn that grappa, a strong Italian brandy, is used during the production of port and that there is white and red port, just like other wines.

The tour included tastings, after which we were encouraged to purchase some port. However, it’s not to my taste, although Marilynn does drink the occasional glass when it’s offered, so we weren’t their ideal customers. Nonetheless, the tour was enjoyable.

Ride across the river

We then stayed on the Gaia side for a boat tour. Marilynn and Declan had scoped out the boat touring options the day before and decided that boats on this side (across the Douro River from where we were staying) were better because kids were free. OK, I admit it–while we have done more serious vacationing in the past seven months than we have in the past several years, we’re still cheap

It was your basic boat tour, up and down the river for 50 minutes while an inaudible narrator sets the scene. I don’t remember much of what he said, but I did notice how many buildings close to the river had apparently been abandoned. One of the largest and nicest developments sat next to several buildings whose roofs were caving in. It reminded me of Florida, where McMansions sit next to single-wide trailers from the ‘50s.

But tours of wine caves and riverfronts are part of visiting Porto, and we didn’t want to miss out.

The statue of Henry the Navigator in the Ribeira district points to the sea. But he easily could be pointing to the significant buildings and sites of Porto, including what Declan and I call the “bling church.”

OK, it’s actually Igreja de São Francisco, a church dedicated to the humble St. Francis. This Gothic church, which dates from the early 1400s, looks plain on the outside. But that exterior hides 100 kilograms of gold leaf plundered from Brazil that adorns altars, ceilings and just about everything in between. To be honest, the audacious display toes the line of gaudy, depending on your tastes. 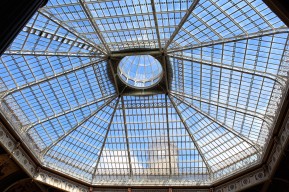 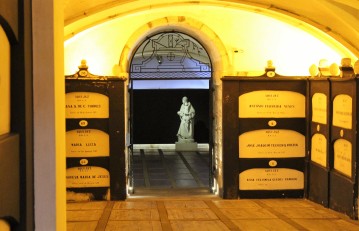 Crypts below the church are a world apart.

The four elements (including the eagle, representing air) can be found in the Hall of Nations.

Interior of the church shows off its opulence

I was more impressed with what can be found underneath the Church of St. Francis, expansive catacombs that served as a full-blown cemetery. The well-heeled of Porto were buried here for about 100 years, until authorities decided that burying people under a church might not be healthy. Many were disinterred and reburied elsewhere, but the disarticulated remains of others can be seen through plexiglass portals on a level lower than even the catacombs.

The church property formerly included cloisters that were destroyed in a fire during the siege of Porto in 1832. In its place rose a cathedral to commerce, the Palácio de Bolsa, or Stock Exchange Palace. Built principally between 1840 and 1850, work on the interior of the Neoclassic building continued for another 60 years.

And once you see the expansive Hall of Nations with its intricate octagonal glass ceiling, the grand staircase that took decades to build and Arabian Hall, you’ll see what took so long. It’s no wonder this building has been designated a UNESCO World Heritage Site.

Tours occur frequently, but bear in mind that you may need to wait until there’s a tour in your language. A guided tour gives you a sense of the building’s history, financed by Porto businessmen to help showcase the city’s importance in global commerce. The stock exchange operated in the Hall of Nations (Pátio das Nações), where the tour opens. Most are mesmerized by the glass ceiling and coats of arms of the two dozen or so countries that the businessmen considered important. However, Declan and I were taken by the mosaic tile in the room, especially the representations of the elements (earth, air, fire and water) as indicated by a lion, eagle, dragon and fish.

Other rooms, which contain mostly original woodwork and furnishings, showcase the ingenuity and craftsmanship of Portuguese artisans. Although one room appears to be nearly all wood, the guide explained that everything above the chair rail was plaster painted to resemble wood. When an especially curious visitor asked why that was the case, the paraphrased answer was pretty much “because they could.”

It was appropriate that the highlight of the tour, the Arabian Hall (Salão Árabe), was also the last room we visited. We knew from the colorful, painted-to-look-like stained glass windows from the adjoining room we were in for a treat. The ballroom didn’t disappoint.

The room features intricate Moorish designs with 18 kilograms of gold leaf. During its heyday, the hall would accommodate large business gatherings, with smaller salons upstairs for private meetings. Arabic writing on the walls was thought to be gibberish, but our guide said her research revealed phrases such as “glory to the sultan” and “Allah above all.”

Believe me, between the church and the Stock Exchange Palace, we saw more gilt in one day than you’d see in the hog farrowing barn. And if you didn’t grow up on a farm, just look that one up.

Harry Potter author J. K. Rowling is the George Washington of our times. It has nothing to do with politics or military strategy. Rather, it has everything to do with the tourism industry that has sprouted up around every place that Washington slept and now is burgeoning with every place Rowling got inspiration or wrote or where parts of the iconic films were shot.

Declan poses in the bookstore.

As you can see, the stairs and elevated walkways are anything but level.

A detail of the stairs, with Marilynn in the background. 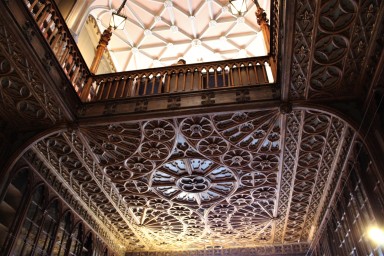 The ceilings and mouldings are ornate.

How many bookshops sport stained glass? 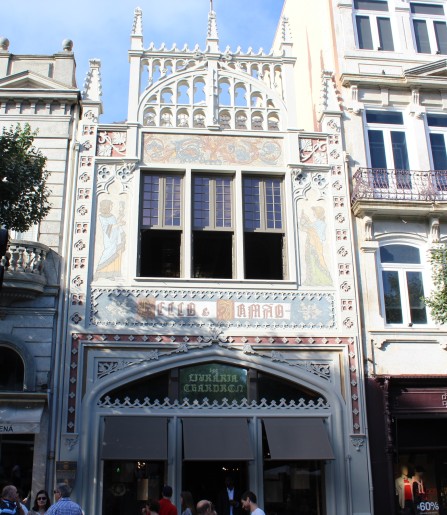 So here we are in Porto, and Declan’s dragging us off to the Livraria Lello, a century-old bookshop that inspired the winding (and moving) staircases at Hogwarts as well as the general feel of the place, with its heavy mouldings, intricate woodwork and colorful stained glass ceiling.

I knew nothing about Rowling’s connections to Porto, but she taught English as a foreign language in the city for several years, marrying a Portuguese man with whom she had a daughter. From there, she moved to Edinburgh, Scotland, with the first three chapters of “Harry Potter and the Philosopher’s Stone” in her suitcase, but more about that later.

Going with the flow

As the success of the books and then films turned Potter into an international phenomenon, any place identified with Rowling also became popular. Apparently, the staff at Livraria Lello formerly were fierce about prohibiting photo-taking by tourists. “Hey, we’re here to run a business,” was the general tone of the staff quoted on some older travel websites I consulted.

But today they embrace the tourists, the red paint in the centers of the stair treads chipped off through constant use, a couple stopping traffic on the stairs so they can take a selfie without others in the shot. Of course, that couple, the three in my family and everyone else in the bookshop paid four euros for the privilege of visiting the business.

The door attendant (I’m not making that up) directs tourists to the corner shop to buy vouchers, then scans them at the door before allowing admittance. I overhead him say (in English, thankfully) that 5,000 people visit the store each day during high season. That’s an awful lot of golden galleons, silver sickles and bronze knuts. You can use the voucher toward books, but we already are hauling more of those back than we intended, the result of hanging out with so many Northern Irish authors. And a large majority of the ones at this bookstore, naturally, are in Portuguese.

There may not have been 5,000 in Livraria Lello when we visited, but it certainly felt that way.

Several years ago, during a fall book tour to support Marilynn’s biography of Stewart Parker, we met a friend of Stewart’s at The Elephant House, an Edinburgh coffeeshop where Rowling wrote while her daughter slept. As I recall, the place was rocking with tourists on a dreary Scotland November afternoon.

The main evidence of the popularity of the place wasn’t in faded stair treads, but in the toilets. Every square inch of the men’s room was filled with graffiti about the books, from the sweet to the profane and about every sentiment in between. I know from Marilynn that the women’s room was the same way.

My favorite graffito was one that said, “Thinking fondly of Emma Watson.” I have a picture of it (yes, I took photos in the toilet), but it’s locked somewhere in the cloud that’s a pain to access remotely.

So you’ll have to take my word for it.