Stonehenge is known the world over for its mystery, for the (alleged) alignment of the stones to the summer and winter solstices and for the achievement of an ancient people. But did you know you can see it from the motorway that runs near the monument?

I’m not sure what I can say about such an iconic landmark that you don’t already know. But I can tell you that Newgrange in Ireland is older. 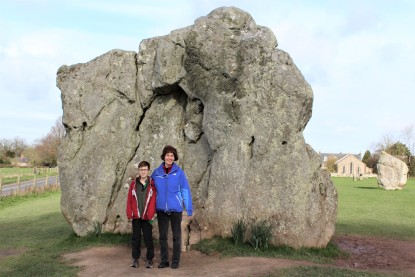 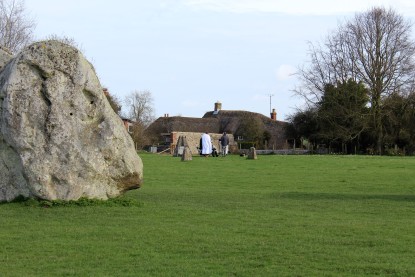 Avebury Stone Circle remains popular among pagans, although we didn’t approach these folks, so maybe they’re doing something else.

Avebury Stone Circle … a road runs through it. 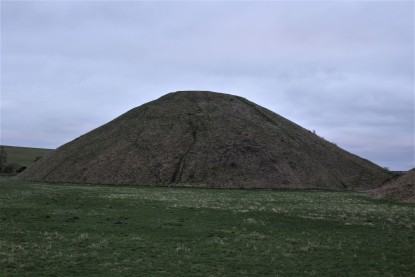 No walking up on Silbury Hill. 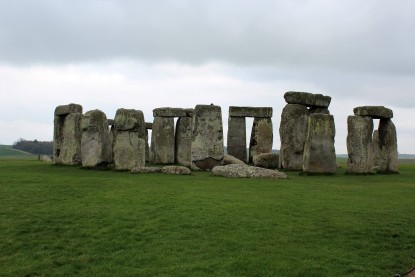 I had always wanted to see Stonehenge, but Marilynn convinced me it wasn’t worth the trouble since you couldn’t get up close to it. I had always imagined a chain-link fence or some such so you could only see it from a distance. But I was wrong. The viewing was close enough to glimpse the structure in all of its architectural glory.

On these trips, I give little input, besides driving the car when necessary. Because there is so much of the world I haven’t seen, I let Marilynn and Declan fuss over the details. On this trip, my only request was to hunt fossils in Lyme Regis. We had planned to visit some other Neolithic ruins, but I didn’t realize we’d pass right by Stonehenge until Marilynn said that morning, “So, do you want to stop by Stonehenge”? “Well, hell yes, I want to visit Stonehenge,” I replied. So we did.

But I was equally impressed with the other structures we saw after Stonehenge. The West Kennet Long Barrow was the burial place for nearly four dozen people from around 3,650 BC. The mound was filled in about 4,000 years ago. During its excavation, archaeologists disinterred the bodies and left the chambers as they would have been during the time. To access this site, you simply park in the layby, pop the cattle gate and walk right up. You can walk in, on and around the site. When we visited, we saw a couple walking down the embankment as we walked up.

Silbury Hill is across the road from the long barrow. It stands 131 feet tall, the largest man-made prehistoric mound in Europe, and was constructed around 2400 BC. Like many other ancient sites, no one knows what prompted early man to build what’s basically a big mound. It doesn’t contain buried treasure, as Victorian folks thought as they tunnelled into the mound without considering the consequences. The burrowing got so bad that the site had to be stabilized several years ago, and access was restricted, so no climbing up on Silbury Hill.

And the village of Avebury was built around its ancient mounds, including a roadway that cuts right through the heart of the huge monument, which is 460 yards across and not perfectly circular. The monument, constructed around 2,600 BC had a ditch running outside the main monument that was 69 feet wide and 36 feet deep. Within the larger circle were two smaller circles, with a stone pathway of 200 stones leading to the structure, what’s now called West Kennett Avenue.

Compared to the Avebury Stone Circles, other known sites are one-quarter the size, including its more famous cousin—Stonehenge. 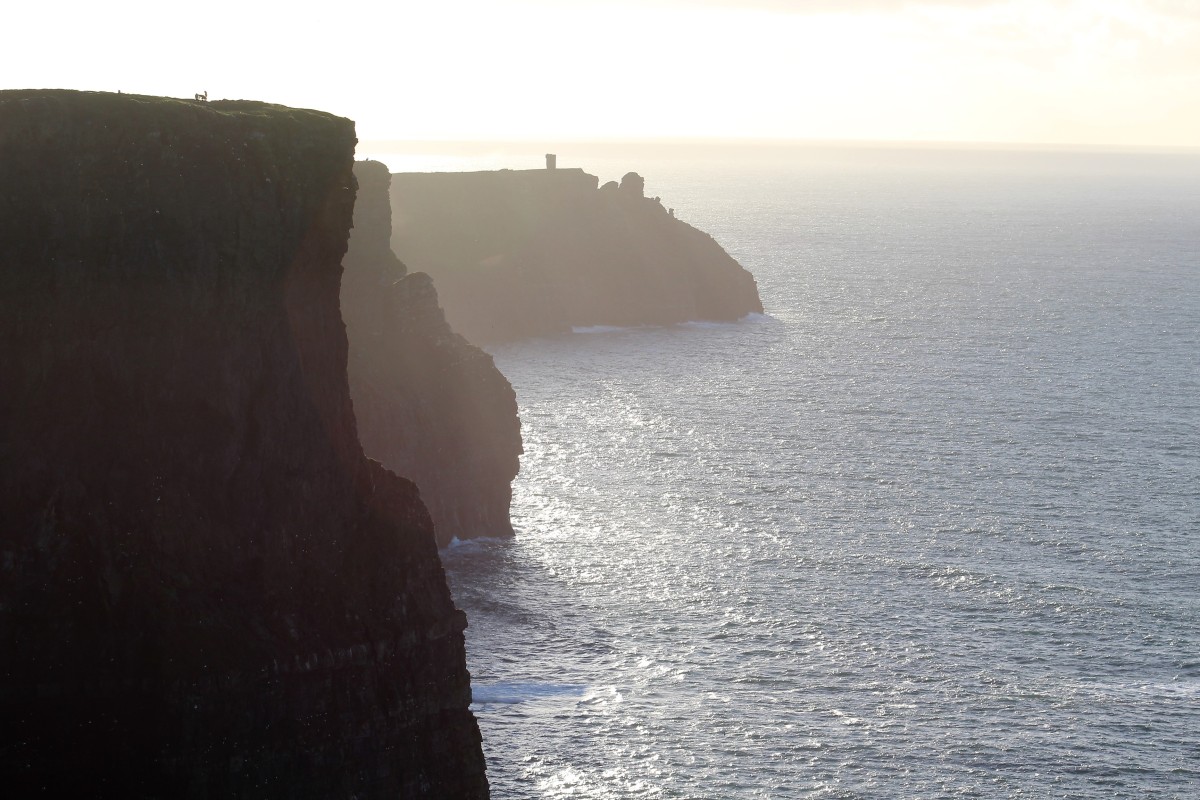 When we last parted, gentle reader, it was pissing rain in Cork. While bouts of rain continued to pelt us over the next several days, we soldiered on with single-night stays in Dingle and Doolin, before hitting Newgrange on the way back to Belfast on Sunday.

I never thought I’d think this, but the Cliffs of Moher could have been a bit more overcast. While the UNESCO heritage site is among the most beautiful things I’ve ever laid eyes on, it’s even more stunning through a bit of cloud. Marilynn and I last visited here with Walker in 2002, and it was on our short list of things to show Declan during our trip.

Back in Cork, though, the rain was driving down amid 20-plus mph winds when we headed out to eat Thursday night. We waited as long as possible before leaving, but hunger prevailed. By the time we got to the restaurant, our trousers were soaked from jacket bottom to knees. I tried to dry my trousers using the hand dryer in the bathroom, to little avail. The tapas meal was among the best I’ve ever had, but that’s fodder for a future column.

The Ring of Dingle

Hiring the car allowed us the leisure to explore after Marilynn’s talk in Cork. Rather than drive the Ring of Kerry, which I hear is beautiful but is also too touristy for our tastes, we went to the Dingle peninsula, staying in Dingle Friday night.

The drive along the ocean was stunning, and very, very treacherous. At least the road was paved, in sharp contrast to our last vacation to Flagstaff when Marilynn wanted to take the Apache Trail from Phoenix instead of the interstate. As the single ribbon of increasingly rough asphalt turned to gravel and sand (for the next 23 miles, the sign said), two things happened simultaneously: 1) the mountainous road became more twisty; and 2) the dualie pickups hauling boats started appearing around what seemed to be every bend.

So, pavement good. But straining to see around every curve from the wrong seat in the car while grasping the steering wheel with enough force to bend iron (and in the rain, nonetheless) not so good. However, we arrived in one piece and even managed to snare an ocean view room at a local hotel.

On Saturday morning, we drove the “ring of Dingle,” which is what Marilynn called it. Officially, it’s the Slea Head drive, a 50-kilometer loop that goes through Dingle. Our name is better, though. The ocean views were gorgeous, and in most cases we had the road (and the sights) to ourselves. One of the highlights was the Gallarus Oratory, a 1,300-year old triangular stone worship building that remains watertight despite the lack of mortar between the stones.

Then we drove to the Cliffs of Moher, a dramatic cliff face worn away by millions of years of ocean wind and rain. It’s truly beyond words, as breathtaking as the Grand Canyon in its own way. So I’ll shut up about it.

And then yesterday, we stopped by Newgrange, also a UNESCO heritage site. It was built an estimated 5,200 years ago and features intricate Irish swirls and patterns that still inform art today.

It’s only a guess what went on there, our guide says, although a few sets of bones were discovered when the site was excavated, strengthening the argument for religious temple. The most distinguishing feature of Newgrange is its alignment with the winter solstice. A light box above the entrance is perfectly aligned with the horizon, allowing sunlight to enter the temple at sunrise for about six days around the winter solstice. When that occurs, the chamber is awash in light, our eager guide says, shining off the walls in the alcove farthest away.

Newgrange is a feat of neolithic engineering for not only the know-how required to move massive kerbstones from more than 12 kilometers away and create a watertight structure but for the precise measurements required to capture the morning light of the winter solstice.

Two awe-inspiring, renowned ancient wonders in two days. Not a bad way to end a trip to the south and west of Ireland.

About the photo: Cliffs of Moher, nearing sunset on 1/28.