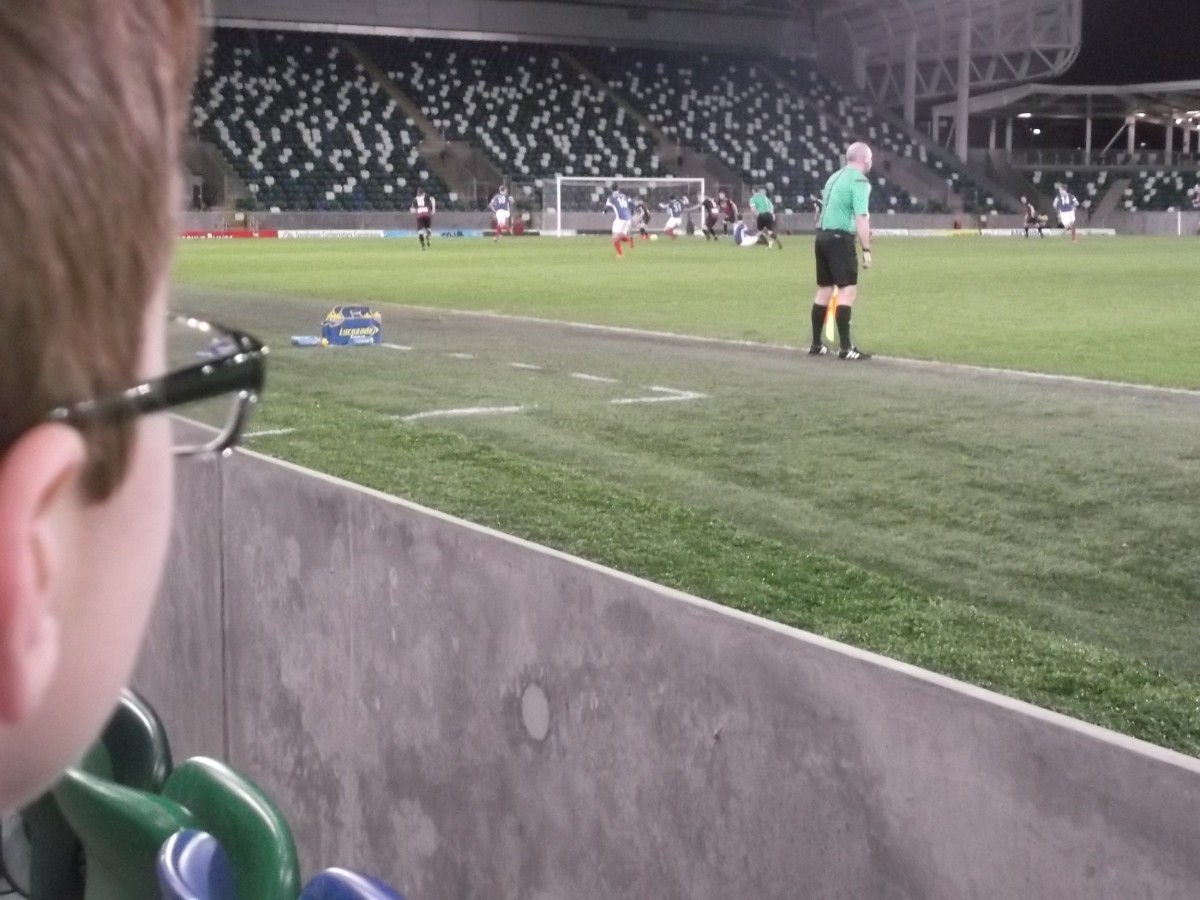 Declan loves football like Winnie the Pooh loves honey. Now when I talk about football, whether in the U.S., the U.K. or in my favorite made-up former Russian republic of Bumfukistan, I’m talking about world football—the kickie kind, the kind the entire planet plays except the US. No helmets required—unless you are Petr Cech.

Folks in the U.S. play a game called American football. I’m not going to say this again, so you need to keep up—football = headers and fancy footwork and not touchdowns. And I guarantee you that we will be talking about football a lot over the next seven months.

Perhaps the only thing that got Declan through a week of Boy Scout camp right before we left (other than not having to pack!) was the fact we were going to see a local professional team play the first full day we were in Belfast. Marilynn had left by then, and the Northern Ireland national football stadium, Windsor Park, not only shares a name with the street we’re living on, it’s also only a 10-minute walk away.

Windsor Park is home to the Linfield Blues of the Northern Irish Premier League, which were four points adrift of the league’s top team, Crusaders FC, a team they had defeated just days earlier. At full capacity, Windsor Park seats 14,000, compared to, say, Emirates Stadium, home to Arsenal of the English Premier League, which seats slightly more than 60,000. Home average attendance for the Blues is 2,500, so getting tickets for a Tuesday night match was definitely not a problem.

The night’s opponent was Coleraine, a team in the top half of the table but one that Linfield was supposed to defeat handily. Expectations were understandably high.

The assistant referee on the home side (see picture) apparently had made a bad call against the home team during an earlier match, because the taunting began almost immediately. But when the Linfield captain got a second yellow card in the 34th minute, the howls became much louder and aimed this time at the head referee, who called the apparent infraction that earned the yellow card.

While I was more interested in the match than in the participants, I did feel the Linfield supporters had a legitimate gripe at the sending off because I can’t see how any referee was in a proper position to call a foul, much less a yellow card offense.

Even though the home team, down to 10 men, played admirably for 30 plus minutes, Coleraine scored the only (and winning) goal in the 75th minute. One can sense when a goal is forthcoming, and this one was well due. From the shouts of impassioned fans (mostly men, of course) you’d have thought the Linfield team name was the “Fook Sakes” or the “For Fook Sakes” instead of the Blues. Linfield scored an equalizing goal a few minutes later, only to have a player called offsides and the goal disallowed.

The Crusaders won their match on Tuesday to extend their lead over Linfield to seven points, with a lot more football still to play this season.

I’m sure we’ll attend more Linfield matches this year, as well as those of several other teams. It’s a great way to watch the locals and learn a few new curse words and the proper way to pronounce them.