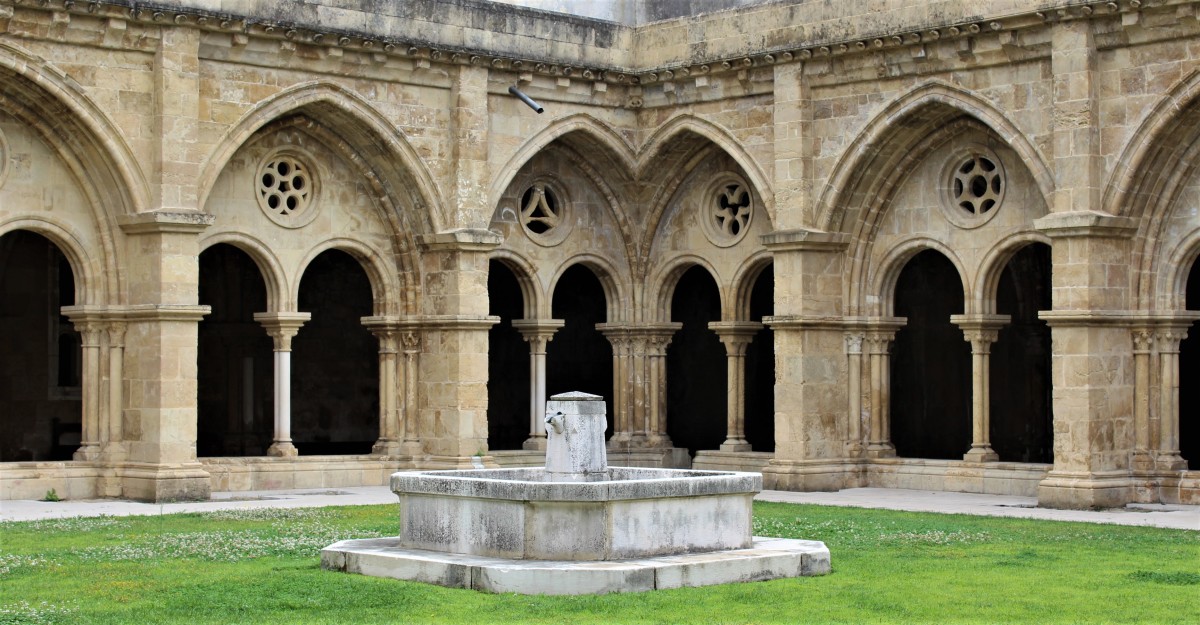 I forgot to mention how hilly Coimbra is. Porto is the same way. Getting up the triple and quadruple switchbacks—while walking on cobblestones—is a test for any person. Fortunately, Declan took that into consideration, too, when planning this trip.

He scheduled mid-day breaks on most days, so I wouldn’t have to be on my feet for too long at a stretch and would be ready to go again in the afternoon. He also booked hotels close to where the action is.

View of the Historical Cathedral of Coimbra from the Castro museum 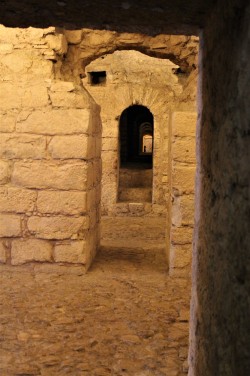 The old Roman cryptoprotico features many rooms and passageways.

Expansive apse of the church of the Convent S. Domingos, which was built between 1553 and 1564.

These azulejos (Portuguese tiles) show the Ptolemaic theory of the universe.

Cloister unearthed at the museum dates from the 11th or 12th century.

In Coimbra, the nighttime action includes fado music, a Portuguese specialty that generally denotes a sense of longing. We attended an event at à Capella, an intimate venue in a 14th-century chapel. The music was interesting, but not really to my taste. However, Marilynn liked it better than the flamenco music and dancing we saw in Seville, Spain, a few years ago.

On our final day in Coimbra, Declan had us scheduled to visit the Museu Nacional de Machado de Castro, built over the remains of a Roman forum. The cryptoportico (a kind of elaborate foundation) is believed to be the largest surviving Roman building in Portugal.

A tour of the cryptoportico begins the museum visit. Long, spooky corridors with occasional archways line one side, while shorter offshoots and individual rooms are dotted throughout. In other places, industrial walkways above other ruins allow good views of other parts of the cryptoportico.

Other highlights of the museum include the 11th- or 12th-century remains of part of a Roman-style cloister that was unearthed on the site in the 1930s. Another is the expansive apse of the church of the Convent S. Domingos, which was built between 1553 and 1564. A controversial decision was made in the 1960s to dismantle the severely deteriorated church, where the apse wound up in the museum. Seeing the amount of degradation, however, the decision seemed a wise one.

You’ll also find lots of religious painting, sculpture, statuary, reliquaries and what Declan and I like to call bling. Among my favorite things, however, were the dozen or so azulejos (Portuguese tiles) that contained mathematical or astronomical concepts dating from instructions issued by the Superior General of the Society of Jesus in 1692. The style suggests they were made in Coimbra.

Going back to church

There’s no better way to top a visit to a museum full of religious artifacts than to see a church. So after lunch, we found our way to the Historical Cathedral of Coimbra, a “church-fortress” dating to the 12th century. The church features small slits in the walls, just like in a castle’s battlements, the better to station archers in case of a siege.

Like all churches this old, there are numerous influences, including Moorish, Gothic and Renaissance. The highlight, for me, however, was the 13th-century Gothic cloister that surrounds the central courtyard. I especially liked the pediments below the arches, each designed in a different pattern.

Our time in Coimbra complete, we boarded a train for our next destination—Porto.