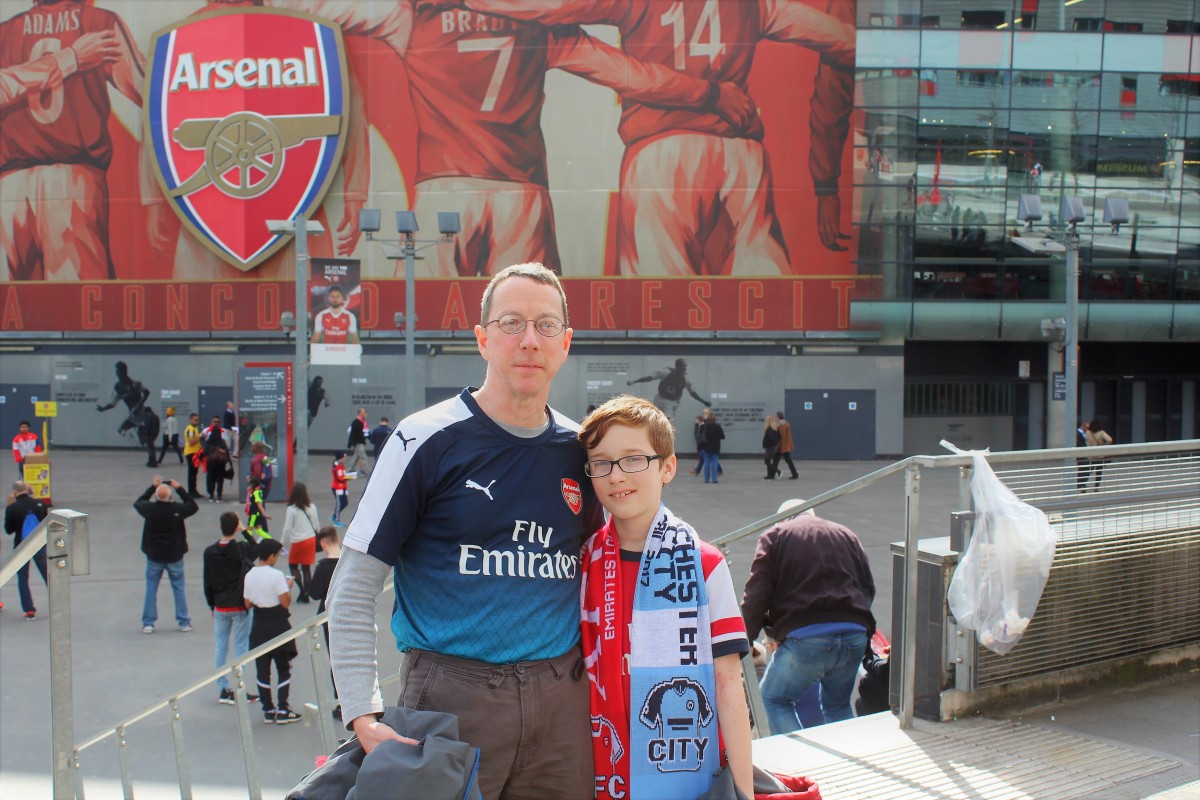 Declan in the club level lounge. 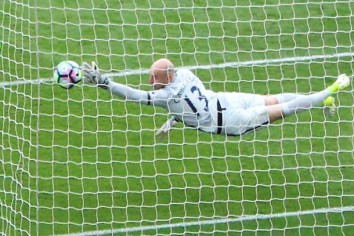 Header goes past the goalkeeper to tie the score in the second half.

Not all fans are happy with coach Arsene Wenger, who hasn’t brought home a major trophy in 12 years.

How do you describe a perfect afternoon? “Brilliant,” was all Declan said when asked to describe our experience Sunday at the Emirates Stadium watching The Arsenal take on Manchester City. Billed as one of the top matches of the year, Manchester City continues to play good football, while our beloved Arsenal has stumbled of late, dropping four of their last five matches and dropping out of the top four in the English Premier League.

We got there nearly two hours before kickoff, to take in the atmosphere both inside and outside the stadium. The stadium is in a residential neighborhood you walk through from the Arsenal tube stop. Vendors of all sorts lined the street selling merchandise, sweets and street food such as hot dogs, hamburgers and BBQ. It looked tasty, although we’d already eaten. Declan bought a scarf commemorating the match that was half blue and half red.

Friends in the right places

We had club level tickets, thanks to my Arsenal friend Jan, who I met in San Antonio in the fall. She was with a group of UK and Irish people on a week-long tour of Texas. We kept in touch, and she offered us her tickets for this match because she was spending the Easter holiday in the States.

That’s the beauty of football. Even with people who support teams other than ours, a team jersey can create a common bond and spark a lively discussion. The cabbie who brought us home last night was a Liverpool man and repeatedly tried to get Declan to convert during the trip. There’s no chance of that, however.

Our tickets were fantastic, just beyond one of the goals. The grass glowed in the afternoon sunshine, razor sharp criss-crosses where the grass was mowed in different directions. We watched officials check the goal line technology of the balls before retreating to the club lounge to watch TV and watch the fans make their way toward the stadium.

We returned for warmups, with Arsenal right below us and Man City in the distance. The practiced fans know when to show up, because half empty turned into nearly full during the last 10 minutes before kickoff.

Header past the goalkeeper

Although the Gunners fell behind a goal early, they clawed an equalizer as halftime neared, only to concede a second goal right before the interval. Fortunately, the home team scored the tying goal in the 53rd minute, a smart header by Mustafi that snuck past the outstretched hands of the goalkeeper. That moment, and the ensuing celebration, was Declan’s favorite part of the match, which ended in a 2-2 draw.

The entire match was intense, with the head official waving five yellow cards (and he could have waved more). In person, you can much better see the flow of the game as momentum shifts from one side to another. From our vantage point at one end, you could see plays develop much better than you can see on TV, the ball quickly moving from player to player.

Following the match, it was back to the club lounge to watch the crush of fans flow over the bridge back to the tube station and watch pundits discuss the match on TV. Although we waited 30 minutes after the match ended to start home, there remained a decent crowd at the tube station, but we were quickly on our way.

Our thanks again to Jan for the great tickets and to the stewards and club staff who made our visit so enjoyable. It was a perfect afternoon, indeed.