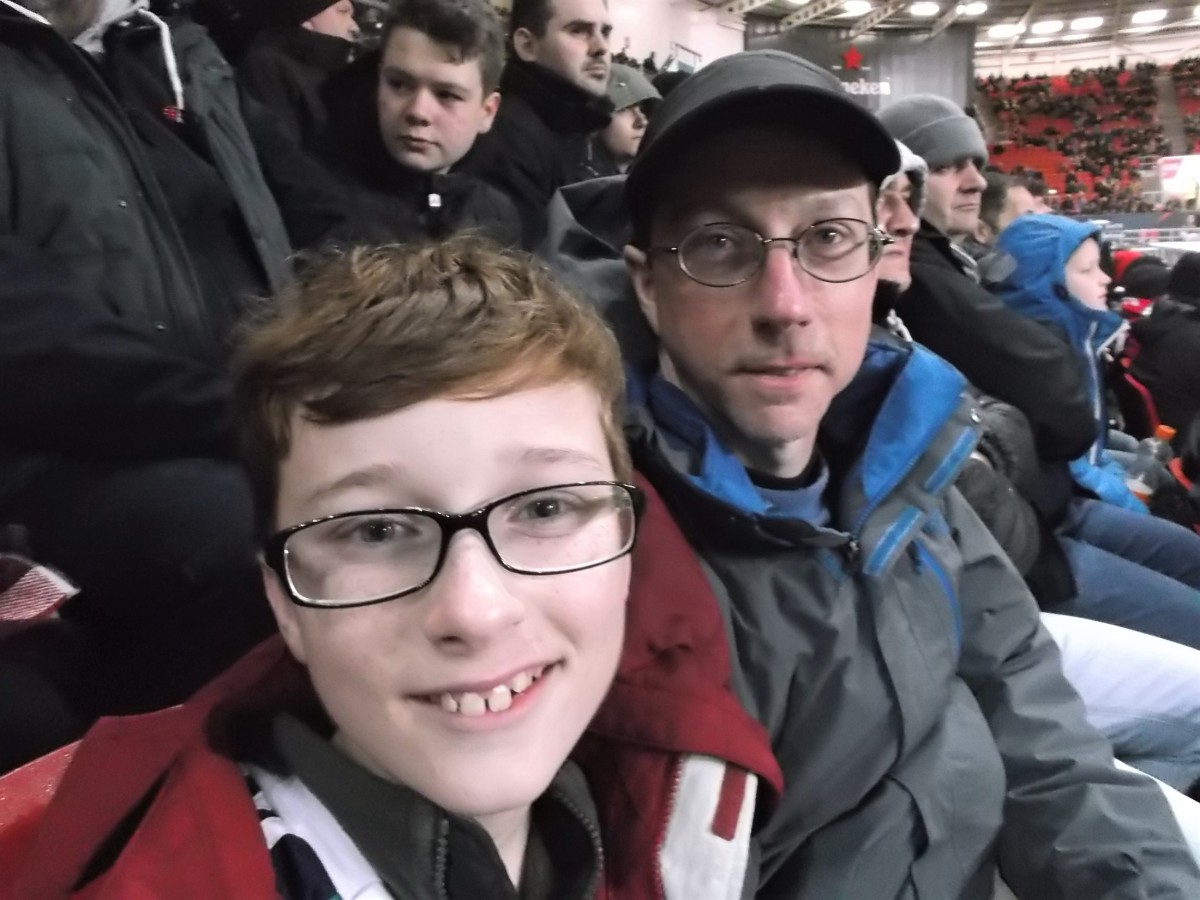 You know you’re finally acclimated to the UK when you:

The answer is C. Attend a football match in crappy weather, as evidenced by our attendance at Friday night’s Bristol City vs. Huddersfield Town match at Ashton Gate in Bristol. The other two are unfathomable (see why at bottom).

Penalty kick during the first half.

Our view from the grandstands.

This was a pivotal match in the Championship, the league right under the English Premier League. What I especially like about football is that it’s a game of comers and goers. Have a great season, and your team gets promoted to the next higher league. Fall apart, and you get relegated to the next league down.

If American baseball were organized in the same way, it would be like the three or four worst major league teams getting sent to AAA, while the best AAA teams got promoted to the big leagues, just like players do. Nothing like the threat of being relegated to get complacent owners to invest in their teams!

Declan would watch football seven days a week if he could, so we purchased our tickets well in advance of the match. Huddersfield Town is near the top of the Championship, where the top two teams advance automatically to the Premier League and the next four have a playoff for the third transfer spot. The home team, by contrast, sits near the relegation zone to the next lower league.

Our tickets were in the second row, near the American football equivalent of the 40-yard line. That’s the good news. The bad news is that our seats were not covered and it was misting cold rain the entire time. I guess we could have moved up (good but not great crowd), but Declan liked our primo seats, so we endured as best we could. The rain swirled around the stadium the entire match.

A neck injury to a Huddersfield player resulted in a lengthy, but necessary, halt in play early in the match and an unheard-of 14 minutes of stoppage time at the end of the first period. But after that false start, the match picked up speed, with Bristol City winning 4-0 to help them stay out of the relegation zone. A friend who is a lifelong Leeds United fan was virtually shouting encouragement during the match because his team is fighting Huddersfield for the final transfer spot.

Unfortunately, I missed the third goal while in the bathroom, but it was apparent what had happened from the roar of the crowd.

A little help from our friends

It was a 45-minute bus ride in each direction, and the wait for the return bus was in excess of 30 minutes. My feet didn’t unfreeze until a cup of tea back at the hotel, and I shudder thinking about the cold two days later.

But, for Declan, it was a highlight of the trip, right up there with fossil hunting in Lyme Regis and above visiting Stonehenge. We were all tired the next day flying home, but staying home because it was raining was never an option.

Why the other answers were incorrect: A. No one craves British food beyond fish and chips (or curry and chips). In truth, the food is getting much better and more varied than on early visits. But, as a cuisine, I’ll take just about anything else.

B. The same goes for British beer. On a UK trip with Marilynn more than a decade ago, I tried every British beer I came across—and was left disappointed and thirsty. Lest you think I’m equating Guinness and my beloved Smithwick’s to this bunch, both are Irish beers brewed in Dublin.