On our second foray into Rome, we saved the best (or at least the most crowded) for last.

The Vatican and St. Peter’s Basilica are tourist magnets, especially to see the Sistine Chapel. We wanted to get tickets first thing in the morning, but the website was in Italian and wouldn’t take our US credit card, so we booked at our hotel the night before and could only get a noon slot—on a Saturday.

Marilynn and Declan on the Spanish Steps.

Gods posing for their album cover.

I call this one Jazz Hands Jesus.

The closest we got to St. Peter’s Basilica. 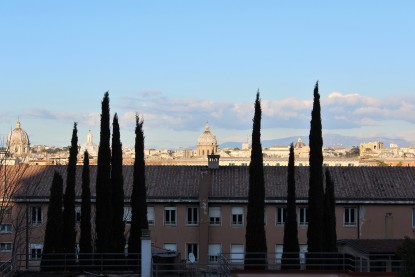 View from San Pietro in Montorio.

We warmed up that morning with a visit to The Spanish Steps, famous for being a grand set of scenic concrete steps built to honor a visit by the king of Spain in 1723. (One interesting note: the French paid for them). We also visited the Piazza del Popolo (the People’s Square), a popular place to people watch and check out the statues, including an enormous obelisk pilfered from Egypt that dates to the 13th century B.C.

So many people. So MANY PEOPLE!

After a quick early lunch and a subway ride, we alighted near the Vatican—to jaw-dropping crowds. “Remember, it’s low season,” Marilynn reminds me. “I don’t handle unrestrained crowds well,” I reply, recalling an event several years ago at the Washington Monument. The cramped elevator ride up was bad enough, but when we were coming down, the guy next to me had his daughter on his shoulders, towering over me and crowding me. “Just 90 seconds down, just 90 seconds down,” I repeat soundlessly to myself, remembering the trip up.

“And we’ll slow the elevator down so you can see the memorial plaques from the states that contributed,” the guide said, which upon hearing the guy with daughter leans over right in front of me. I said something to the effect of, “I have a borderline panic disorder and you need to get the hell out of my personal space!”

A forced silence ensued while the elevator car descended to the bottom and the doors opened. The crowd parted as if by magic to let the screaming lunatic off first.

It wasn’t that bad at the Vatican, but it was close. The forced march to the Sistine Chapel was the worst. I swear we encircled the Vatican twice and marched right through Pope Francis’s personal quarters at one point while walking between buildings. I joked on Facebook that I had to hip-check a couple of Asians, but, in reality, I wasn’t kidding. I got separated from the family on multiple occasions.

But the grandeur of the Sistine Chapel does live up to its billing. It’s hard to describe what it’s like to be in such an iconic structure and to wonder at what it must have been like for Michelangelo to paint it over four years. It was breath-taking and worth the cattle-like way we were herded into the chapel, which fortunately is much larger than imagined, so I had just enough space.

Then we went to St. Peter’s Basilica, where we didn’t make it past the courtyard. We’d all had our fill of crowds, so we went off the beaten path to Trastevere, which Fodor’s calls “Rome’s enchanting, medieval heart.” Marilynn wanted to see San Pietro in Montorio, the church where 17th century Irish rebel Hugh O’Neill is buried. Loyal readers will recall O’Neill from our trip to Kinsale, where he got his arse kicked in a decisive 1601 battle.

Unfortunately, the church was closed Saturday afternoon, but its location overlooking Rome provided terrific views of St. Peter’s and the city. We saw a powerful photojournalism exhibit at the Royal Academy of Spain, before spending the rest of the day wandering through that part of town.

After seven straight days of Italian food, we were delighted to stumble upon Eat Street Food, where we each devoured hamburgers (two with eggplant [really!] and one with egg, bacon and sauce, lots of sauce) and fries. I also enjoyed what might have been the best house wine I’ve ever tasted.

Thus sated in both body and spirit, we made our way back to our hotel, ready to get back home to Belfast.