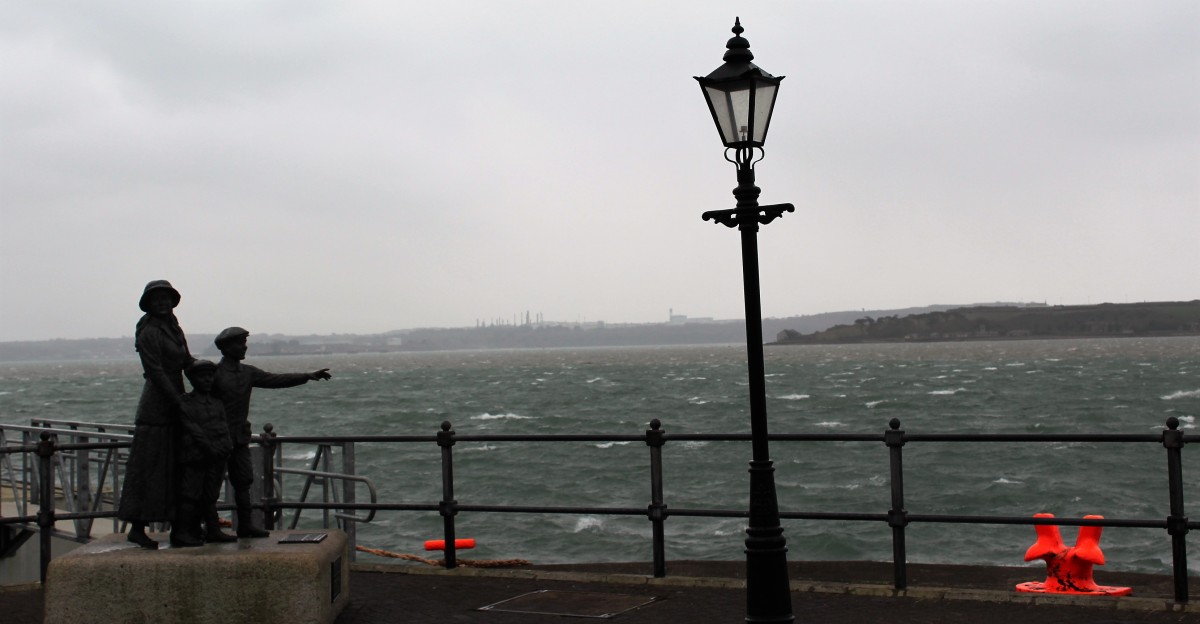 I think southwest Ireland is cursed for me. Fifteen years ago, when Marilynn and I were showing Walker around the island during a driving vacation, I messed my back up so much that we had to stay in one place for several days. What did we miss during the downtime? Driving the Ring of Kerry.

So here we are again, same couple, different kid in Cork, our first foray from Belfast since our arrival three weeks ago. Marilynn was giving a talk at University College Cork, then we are off to see Cobh, Kinsale, the Dingle peninsula and the Cliffs of Moher. That was the plan, anyway, until the 30-plus mph winds and the torrential rains hit.

The first day was OK except for the wind. While Marilynn gave her talk, Declan and I checked out St. Fin Barre’s Cathedral, the city centre, the indoor food hall and the Scout store. For dinner that night, we ate at a college pub where I had a meat pizza that included black pudding. The pizza was OK at best, and the black pudding neither added nor detracted from it.

Yesterday, we went to Cobh (pronounced “Cove”) to visit the Cobh Heritage Center, which has a rich maritime history. It was the final port of call for Titanic before it sank in 1912, and many of the survivors of the Lusitania also were housed there. But it should be known for much more than shipwrecks. The city, known as Queensland then, transported indentured servants to America, slaves hither and yon, criminals to Australia and emigrants fleeing the Potato Famine.

The Titanic exhibit is long on pictures, thanks to those of Frank Browne, whose uncle paid for Browne’s journey on Titanic from Southhampton to Queenstown. Browne was an avid photographer and thoroughly documented his relatively short jaunt. A wealthy American couple offered to pay his passage to New York, but when the theological student sought permission from his Jesuit Superior to journey onward, the response was “get off that ship!” Which, of course, proved fortuitous for Browne.

Among the few artifacts is a bottle found near Cork in 1913, bearing a message from Jeremiah Burke, a Burke of Glanmire, Cork, and tossed overboard a day or days before the disaster.

Although the Titanic exhibit in Belfast is vastly superior to this small presentation, the Cobh Heritage Centre proved worth a visit.

Until the skies let loose, anyway. It had been so windy the previous night that Declan got blown off course a couple of times. Combined with a driving rain, unfamiliar streets and an unfamiliar road layout (left lane! LEFT LANE!!), the drive to Kinsale was nothing short of perilous.

Marilynn wanted to see Charles Fort (place, not person) to get her in the right mind to write about Brian Friel’s play “Making History,” a play about the Earl of Tyrone (Hugh O’Neill) who led Irish and Spanish forces against the English during the 1601 Battle of Kinsale. His troops endured a long trek in crappy weather like we were experiencing, so it did inform her thinking. It was miserable for us, and we had modern rain jackets, a car and the ability to drive into town for lunch. This fort was built 75 years after the battle but is in the same general area.

We decided to bag seeing the fort and drive home when we chanced upon it anyway. However, the rain was slashing diagonally across the windshield, and Declan and I declined to get out. Marilynn took a two-minute peek and high-tailed it back to the car.

Note on Cobh: The town originally was called Cove, before it was renamed Queenstown in 1849 following a visit from (wanna guess?) Queen Victoria. It became Cobh in 1920 when Ireland became an independent state. “Cobh” is a Gaelicized rendering of “Cove” – it has no meaning in Irish.

One thought on “When it rains, it pisses rain”